This month we were going to bring you an article about camping at Ivanpah with Team USA, but the trimming tips from the Guru presented too good an opportunity to pass up… we hope you enjoy his insight into trimming a blokart sail. Also this month we have an update on IBRA, and a collection of great videos from around the world. You can also head over to the forum, where you can discuss topics like, the surface, the accommodation, what to see and do, and much much more.   This issue: 1. IBRA update – whats been happening with IBRA 2. Trimming tips from the guru 3. Video night – a collection of great videos to show your friends after dinner

1. IBRA update Since the 2014 work champs in Perth there has been lots of behind the scenes work by a few dedicated blokart sailors. A few great steps forward have been taken with theWorld Championships which we all know about now. This will no doubt produce a bigger and better event for everyone going forward. The International Blokart Racing Association, IBRA, has also undergone a transformation. Over the past 6 or 7 years IBRA has been led by a dedicated group of 5, representing the founding associations (EBA, ABA, NZBAI, NABSA) and BIL, and after working tirelessly under an informal arrangement the opportunity arose to formalize this group with an “Agreement” which outlines how the group operates, who is represented, how many representatives each association receives, and what their focus is to be on. This new agreement will ensure that the class is well managed into the future, focusing on ensuring the 1 design class rules and the sailing rules are fair for all competitors world wide. Representation is now based on a proportional system allowing associations up to 3 reps to sit on the IBRA committee, making for a more democratic process. The founding associations, can also vote on applications from other national bodies to join the IBRA committee, where their country is not represented by one of the founders. This will ensure that emerging regions can benefit from the IRBA knowledge base and help guide the class. The founding associations will appoint their representatives in the coming months (if they have not already) and the new IBRA committee plans to meet in September.   2. Trimming Tips from the Guru Sail Trim Here are some pointers and examples regarding tuning your sails for power and speed. Guys like Russell Harray are very fast and have their downhauls virtually loose and control the leech mostly by sheeting. This gives good power as the draft of the sail is 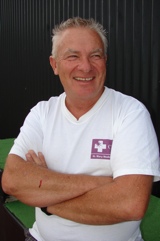 deep and forward.  It is only with speed on long runs that the downhaul needs to be flatter, or with a shorter whip you can sheet in tight to induce more mast bend to soak up the draft to flatten the sail. As the mast bends back it soaks up the draft and the centre of pressure moves back more to the middle of the sail and is better upwind, but if it is over cranked the sail inverts and has crows-feet coming out of the clew and batten ends etc and this is” dog slow”. Not good for the sail either. Generally too much emphasis is put on cranking the guts out of the sail and this is often slower. I know when I was freaking out from getting my butt kicked by Darren,Tim and Gavin, I cracked the D/H on more and actually slowed down.  I let it off a bit and sailed slightly faster deeper angles which saved this little piggies bacon…but only enough for a fifth! In very gusty conditions a softer first and second section allows the mast to bend and the sail exhaust the gusts allowing all wheels to stay on the ground and put maximum effort into projecting the Kart forwards, rather than popping up and you having to dump power all the time. Also the sail sort of pumps a bit when it comes back and gives little “lifts”. Dave Bush who was 115kg was a gun at sailing his 3m sail and always won the 90 mile beach and 100km marathons with this setup. The stiffer the mast, the more downhaul needed to have the luff curve settle in and the more draft forward. A soft mast will bend too much and the draft will flatten out too much with hard downwnhall and not produce power, just bend off and invert. Remember the sail is an aerofoil and will work best when it is smooth and presenting a nice shape in the prevailing conditions and Mast selection is a big part of this. Sheeting Theory Those who watched the 2014 Worlds edit below, would have noticed the different sheeting position use by some sailers, including Paul Beckett who explains the reasoning, as follows: http://www.youtube.com/watch?v=xxEtCVJcywg Ok ,with relation to the sheeting system you saw with Santi and I in the video.  His was essentially the same as mine in the Mainsheet to ratchet block configuration.  With the difference being that his Ratchet lanyard attachment went around the downhaul setup and mine went through the top shackle and over the top of the downhaul sheaves. With the Ratchet block over the top both setups give you a straight pull from the rear pulley on the sail along the foot of the sail and s such theoretically makes for less

friction and a better feel of the power the sail is or isn’t producing if you have the Ratchet off.  In light air it is definitely an advantage to have the ratchet turned off so that you get more feel of the pressure in the sail. I am preferring this setup over the production block position, which has a little more friction for the sheet to deal with, but it is a personal preference. Additionally, this system keeps the mainsheet right away from messing with your downhaul setup. The other main benefit I have found is that if you accidentally drop your mainsheet it is right there in front of you, you can see it,  so it is much easier to pick up than looking down under the tiller bar etc. Down hauls – The Spanish setup is quite different to mine as it uses fewer blocks and uses the loop through the eye of the sail as one purchase,  it also has two adjustment points but still achieves the 6:1 maximum allowed in the Performance division. The setup I use incorporating the “Ultra downhaul 2” with the snap shackle and swivel is the setup I prefer as you cannot hook up the wrong way as it just swivels into place, and the cleat is right in front of you. If you couple this with the bungee running to the rear boom strap and a small reversing block it means your Down-haul parrell bead is just above your head and always out of the way if tensioned correctly (a little bit of pre-setup between sails makes for quick and Idiot-proof changes. The reason for the 6:1 in performance is that the stiffer Mast sections require higher downhaul loads to set the sail into the luff curve and offers finer tuning of the draft of the sail for optimum trim. Some guys even have paint marks on their D/Haul chord or on the foot of the sail for reference. So the 6:1 just makes sail tuning easier. Talk soon guys Best Regards PB……..Your local GURU, hahaahaha   3. Video Collection We are finding more and more great videos every week, with Drones featuring of late the quality is on the improve too. Here are some of our favorites: http://vimeo.com/100425375 http://www.youtube.com/watch?v=bdeJXlXNL30 http://www.youtube.com/watch?v=TXSj0CBKxaI http://www.youtube.com/watch?v=JXFjeENzQFc http://www.youtube.com/watch?v=nvwEiU1KQSw http://www.youtube.com/watch?v=FDbSOJBeAhM http://www.youtube.com/watch?v=Zqg7g7nxWU8 http://www.youtube.com/watch?v=W38bhT5BP       Next Update August 2014 1. The Ivanpah Campsite – Why camp on the lake bed with Team USA 2. Training tips – how to get the most out of your training