The planning for the 2016 Blokart World Championships to be held on the dry lake of Ivanpah, USA, is coming along nicely. The host’s team, lead by Dave Midgley, are planning some great social events for the regatta, with happy hours each evening after racing and two awesome dinner functions. You can also head over to the forum, where you can discuss topics like, the surface, the accommodation, what to see and do, and much much more.   This issue: 1. Things to do around Ivanpah – National Parks. 2. Weather Information – where to get the best forecasts. 3. 2018 Worlds Update.   Things to do around Ivanpah – National Parks This issue of the 2016 update, we look at the National Parks located in the South West United States. Near Ivanpah 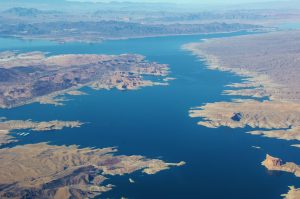 Lake Mead – Flanked by mountains and an around 1 hour drive east of Las Vegas, Lake Mead is home to marinas and secluded coves. Great for fishing, boating, kayaking, kite surfing and water skiing the area has campsites and RV lots make it an ideal base for exploring the lake and the Colorado River. There are plenty of walking trails for Hikers that take you through mountains and canyons, as well as roads suitable for cyclists and road trippers Red Rock – Not far to the west of Las Vegas there is a spectacular stretch of red-hued crags and canyons, formed by sandstone that rises to thousands of feet above the desert floor. There are a number of marked trails thread through this landscape, some suitable for children and some for those desiring a more challenging hike. A myriad of animal and plant species live in the park, allowing for a few wild encounters on the outskirts of Las Vegas. Valley of Fire – Valley of Fire is located in the Mojave Desert approximately 58 miles Northeast of the Las Vegas Strip.  Valley of Fire is the oldest Nevada State Park and was dedicated in 1935.  Valley of Fire State Park covers an area of approximately 35,000 acres.  Valley of Fire was named for the magnificent red sandstone formations that were formed from great shifting sand dunes during the age of the dinosaurs more than 150 million years ago (Mesozoic Era).  These brilliant sandstone formations can appear to be on fire when reflecting the sun’s rays.  Other important rock formations include limestone, shale, and conglomerates. California Death Valley – 120 miles west of Las Vegas over the boarder in California is Death Valley. An huge National Park, the region encompasses empty acres of sand dunes and desert, and contains the hottest, driest and lowest place in North America. But as well as desert there are many other natural features to explore: salt flats, faults in the earth, springs, crazy rock formations, ice-capped peaks in winter and wildflower meadows after the spring rains. This unique and changeable terrain is well set up for exploration by foot, bike and car. Joshua Tree – Taking a page from a Dr Seuss book, the whimsical Joshua trees (actually tree-sized yuccas) 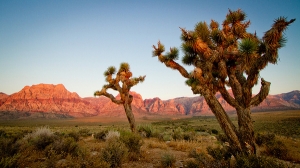 welcome visitors to this 794,000-acre park at the convergence of the Colorado and Mojave Deserts. It was Mormon settlers who named the trees because the branches stretching up toward heaven reminded them of the biblical prophet Joshua pointing the way to the promised land. Sequoia National Park – The park is famous for its giant sequoia trees, including the General Sherman tree, one of the largest trees on Earth. The General Sherman tree grows in the Giant Forest, which contains five out of the ten largest trees in the world. The Giant Forest is connected by the Generals Highway to Kings Canyon National Park’s General Grant Grove, home to the General Grant tree among other giant sequoias. The park’s giant sequoia forests are part of 202,430 acres (81,921 ha) of old-growth forests shared by Sequoia and Kings Canyon National Parks. Indeed, the parks preserve a landscape that still resembles the southern Sierra Nevada before Euro-American settlement. Arizona The Grand Caynon – Over millions of years, the Colorado River has carved a vast gorge in the Arizona desert, creating the Grand Canyon. A World Heritage Site, the Grand Canyon is a mile deep and, at its widest point, a staggering 18 miles across. You can drive to lookout points, the most famous of which is the South Rim, about six hours by car from Vegas. Or you can delve down into the canyon itself, either on foot, on a mule, or by journeying down the Colorado River. For those with more money than time, a number of helicopter tour companies make the journey from Las Vegas. Utah Zion National Park – Zion is a truly spectacular national park, with narrow trails winding up and along immense sandstone cliffs, creeks rushing through valleys, and jagged rocky outcrops spiking the sky. Slot canyons are scattered throughout this landscape, and there is the opportunity to undertake terrific adventures rappelling into the dark, cool depths of some of them. Keyhole Canyon is a particularly good place to try this out   Weather Information – where to get the best forecasts Weather forecasting can be tricky business. So where can competitors find the best forecasts for the area and get a

feel for what the wind is likely to do? There are three really great weather models to chose from. The first and most widely used is known as the GFS model. This is run 4 times a day by NOAA (the US weather service) and does a good job at predicting the weather based on computer models up to 10 days out. The second model is the CMC, which is similar to the GFS model, but run by the Canadian weather service. With a slightly different algorithm approximating the weather systems, this model can at times be more accurate dealing with thermal effects (sea breezes, katabatics etc) The Third weather model is that of the ECMWF, which is the European weather model. This model is the gold standard in weather prediction, often forecasting hurricanes, tropical storms, cyclones etc well before the other two models. The draw back is that this model is not widely available to us the end users. So where can I see the output from these models? GFS – This is the most widely used and the one that most people are familiar with, but probably don’t realize it. Its the one that sites such as WindGuru, WindFinder, Seabreeze and many others use. For Ivanaph the best way to view this model is via – Windfinder’s Ivanpah Forecast CMC – This one can be a little harder to find, the best way to get this information is via Predict Wind. Predict Wind is a great tool, created by Jon Bilger for the Alinghi Americas Cup team and commercialized in 2008. It gives four weather models at different resolutions based on a fee subscription basis ranging from Free to $500 per year. Predict Wind enables users to view both the GFS and CMC models, and also Predict Wind’s own PWG & PWC models with post process the initial two to include land effects, sea breezes, etc. By comparing multiple models side by side you can easily see if there is confidence in the forecast or not. If the models are all saying similar things, you can be pretty confident that it is giving a good forecast. ECMWF – Not easily found in a tabulated form due to its cost to commercial operators, the easiest way to view this model is via the standard weather maps directly from ECMWF’s website.   2018 Worlds Update

As promised to the blokart community back in February this year, blokart International Ltd would like to formally invite bids to host the 2018 blokart World Championships. Bids will be collated over the next 12 months and in June 2015 those bids (should there be more than one option) will be presented by blokart International Ltd to the IBRA committee so that IBRA and BIL can work together in selecting the host. The host will be announced in September 2015. blokart International Ltd wants to work with potential hosts to help them prepare their bids over the next 12 months, which will help generate the best bid package for the candidate and show that the hosts can work with the BIL team who have the event management responsibility. As this is the first bid process in this format, BIL welcomes constructive feedback on the ‘invitation to bid’ to ensure the event will be successful, and the bid process is as smooth as possible for future events. Details on the process, and the invitation to bid can be found on the event website here.   Next Update July 2014 1. IBRA update – whats been happening with IBRA 2. The Ivanpah Campsite – Why camp on the lake bed with Team USA 3. Video night – a collection of great videos to show your friends after dinner